Chelsea manager Thomas Tuchel and Tottenham boss Antonio Conte have been charged with improper conduct after their explosive clashes in Sunday’s stormy 2-2 draw.

Tuchel and Conte were embroiled in two angry exchanges as tempers flared in the Premier League showdown at Stamford Bridge.

Both managers were booked for the first bust-up, which was sparked after Conte celebrated Pierre-Emile Hojbjerg’s equaliser close to Tuchel’s technical area.

Tuchel and Conte clashed again when an aggressive handshake between the pair, who were both shown red cards, sparked further ugly scenes involving players and coaching staff from the London rivals.

“Thomas Tuchel and Antonio Conte have both been charged with a breach of FA Rule E3, following the Premier League fixture between Chelsea FC and Tottenham Hotspur FC on Sunday 14 August 2022,” an FA statement said on Monday.

“It is alleged that the behaviour of both managers was improper following the end of the fixture. Thomas Tuchel and Antonio Conte have until Thursday 18 August 2022 to provide their respective responses.”

Tuchel could also face further charges from the FA, who are probing his post-match comments about referee Anthony Taylor.

Tuchel said “maybe it would be better” for Taylor not to referee Chelsea again, with the German incensed about both of Tottenham’s goals.

He felt Hojbjerg’s effort should have been disallowed for offside against Richarlison, as well as a foul on Kai Havertz several seconds earlier.

Tuchel also insisted Tottenham defender Cristian Romero should have been punished for pulling Marc Cucurella’s hair, with a VAR check ruling out a red card for an incident that came just before Harry Kane headed the visitors’ stoppage-time equaliser.

Both managers could face a ban as a result of their antics, with Tuchel already conceding he might be absent from the touchline when Chelsea face Leeds next weekend.

“So, good! I cannot coach but the referee can whistle the next game,” he said after the Tottenham match.

The London derby, featuring a series of aggressive tackles from players on both teams, was dubbed ‘The Battle of the Bridge Part 2’ in reference to an equally feisty encounter between the teams in west London in 2016. 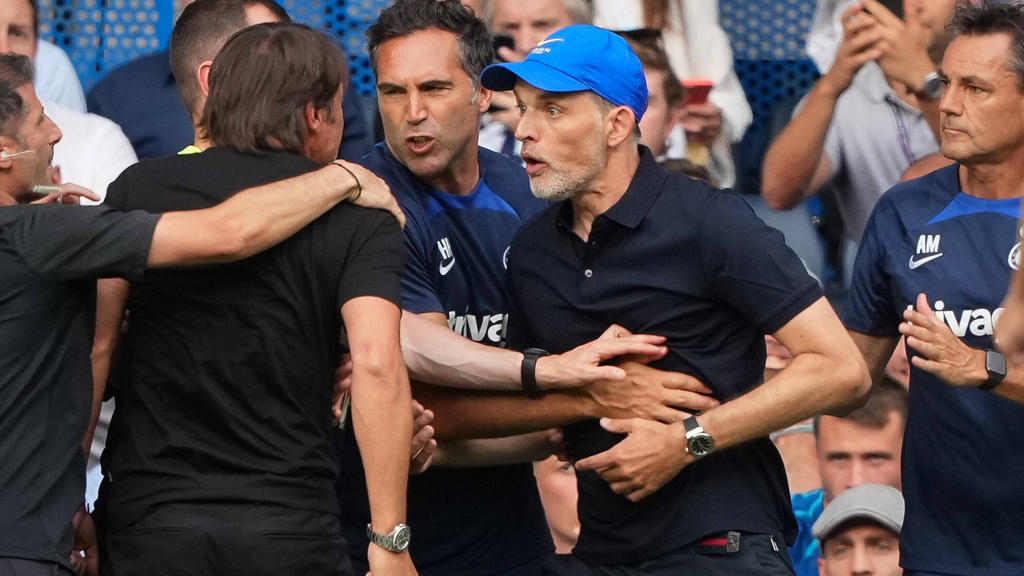